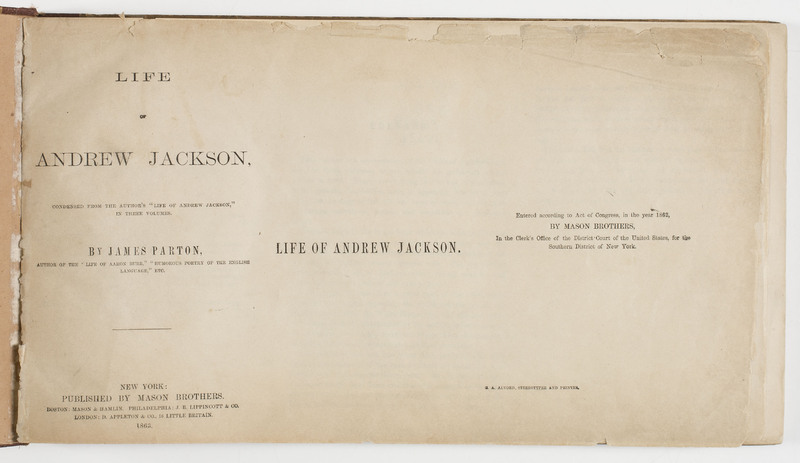 Click here to discover why a curator would want this oddly formatted book, James Parton’s Life  of Andrew  Jackson, Condensed. 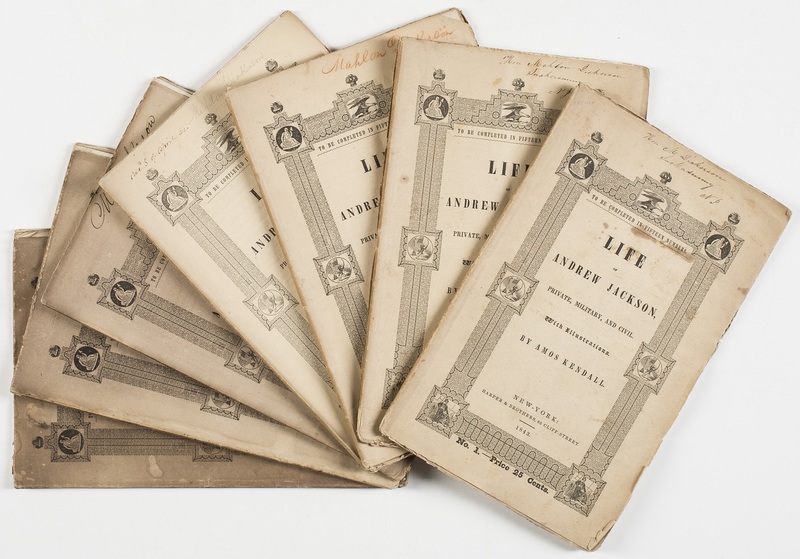 Click here for more about what can be learned from this Life of Andrew Jackson by Amos Kendall, an incomplete book that on p. 288 ends abruptly midsentence.

The goal in curating a collection is to build a group of items that speak to one another in intelligent and interesting ways. Their conversation together tells a story that would otherwise remain unheard.

Once it was decided AAS would acquire the William C. Cook Jacksonian Era Collection, decisions still had to be made regarding each specific item and how it might relate with or duplicate what was already in the Society’s library. Since the curatorial work at AAS is divided into five positions based on format—books/pamphlets, children’s literature, graphic arts, manuscripts, and newspapers/periodicals—all of AAS’s curators were involved with the William C. Cook Jacksonian Era Collection.

Individual curatorial acquisitions decisions are guided by the American Antiquarian Society’s collection development policy. The goal is to preserve at least one copy of everything printed before 1876 in North America, plus later materials and manuscripts on a more limited basis. Within these strict geographical and chronological bounds, the Society’s librarians and curators have always collected broadly, not knowing what will be of interest in the future. This approach has meant that time and again researchers have found at AAS precisely those primary sources essential for their research.

The Society’s omnivorous appetite for books and other materials is constrained by the limits of acquisitions budgets, library staffing, and physical storage space. Like any other collector, AAS curators must decide which items to acquire first, which subjects or genres to target, and when a second copy provides useful information or when it is merely redundant. Everything that ends up in a special collections research library has a cost associated with it, even the gifts. A wise curator counts that cost at the beginning.

When assessing potential new acquisitions, AAS staff must first determine if the Society already has this publication. Fortunately, most of the Society’s holdings have records in the online catalog but there are exceptions, especially among the books and graphic arts collections. Many potential acquisitions need to be double- or triple-checked against card catalogs and reference works such as the 754 green folio-sized volumes of the National Union Catalog, Pre-1956 Imprints (or N.U.C.) in the AAS reading room. Occasionally, curators must resort to trying to think like a nineteenth-century librarian and will check the shelf in the spot where they think their predecessor may have put that particular volume. This additional searching is fruitful often enough that it is a necessary part of an AAS curator’s repertoire. Even if a title is already at AAS, a second or even third copy may be acquired for its binding, annotations, or because it is a variant edition (see the example of the Washington, D.C., directory in the sidebar).

Curators do not have to go it alone in the decision-making process. AAS has a collection development committee consisting of the five curators, the head of acquisitions, and the Society’s librarian. The group meets monthly to assess the current state of the acquisitions budget, to talk through difficult decisions, or to consult regarding large purchases. Individual curators have discretion to make acquisitions decisions for their own collections, including spending the endowed funds that are allocated annually to each department. As a sign of just how congenial this group is at AAS, on occasion curators will even chip in money from their own acquisitions budget to support a significant purchase another curator cannot afford but must have. Such items are sometimes described as something that “just screams AAS”—but how does a curator know when an item belongs in the Society’s library?

When a book first arrives at AAS, it is essentially there on probation or “on approval” until the curatorial decision-making process is completed. Once a curator determines a book is a good fit for AAS then the work of physically integrating it with the Society’s other collections begins, starting with acquiring and accessioning.