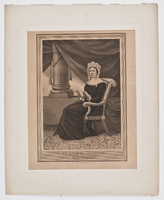 Click here to learn more about Mrs. Rachel Jackson. Late Consort to Andrew Jackson, President of the U. States.

Click here for more about Sketches and Eccentricities of Col. David Crockett, of West Tennessee.

The American Antiquarian Society has an excellent collection of biographies of both famous and everyday early Americans. The William C. Cook Jacksonian Era Collection greatly expanded the Society’s holdings of biographies of Andrew Jackson himself, but it also contains material on many other historical individuals.

As for Andrew Jackson himself, his life was nothing if not dramatic. When he was born in Carolina in 1767, it was a colony of Great Britain, yet at the age of thirteen he was held by British soldiers as a prisoner of war during the American Revolution. By the time of Jackson’s death in 1845, he was known by every schoolchild in the United States—first as a general fighting the British in the War of 1812, then as an “Indian fighter” against the Seminoles and Creeks, and then as the seventh president of the nation, serving two terms. Many controversies emerged during Jackson’s lifetime regarding his personal life and policies on subjects as varied as Indian removal, slavery, and his wife Rachel’s accidental bigamy. Evidence from his own time, in addition to depictions of his story throughout the intervening centuries, are all available at AAS so scholars can examine these sources in their original forms.