Sketches and Eccentricities of Col. David Crockett, of West Tennessee

Like Jackson himself, Davy Crockett (1786-1836) came to be known as a larger-than-life Tennessee frontiersman. However, Crockett was no supporter of Jackson. He vehemently opposed many of the policies of President Andrew Jackson, most notably the Indian Removal Act. After losing a reelection bid to serve as a Tennessee representative in the U.S. Congress, Crockett set out for Texas where he was killed at the Alamo.

Sketches and Eccentricities of Col. David Crockett was an unauthorized biography of Davy Crockett. The author was unknown to Crockett (no proprietor is mentioned in the copyright notice on p. [ii] on this edition) and still has not been definitively determined today. Crockett wrote his own autobiographical "Narrative" the next year in 1834 to correct the wrong impressions produced by this publication.

This book joins many other Crockett materials already at AAS (click here for an AAS catalog search). Prominent among these are a virtually complete collection of Crockett comic almanacs, filled with jokes, stories, and tall tales. The main almanac title, Davy Crockett’s Almanac, was published from 1835 to 1841 and spawned many imitators. The then still-living Crockett almost certainly had nothing to do with these publications, other than to inspire them through the immense contemporary interest in his persona.

Sketches and Eccentricities of Col. David Crockett, of West Tennessee 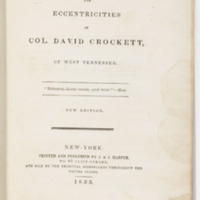