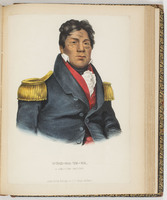 Click here for more about Push-Ma-Ta-Ha, A Choctaw Warrior

Click here for more about Life in Philadelphia: What de debil you hurrah for General Jackson for? 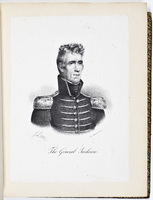 Click here for more about this Jackson Portrait by Jules Lion, possibly a free black man of color?

Individuals of non-European ancestry are represented throughout the Society’s collections. To aid in identifying such materials, the AAS website provides overviews of Native American Resources and African American Resources.

Within the William C. Cook Jacksonian Era Collection itself, the experiences of Native Americans and African Americans can be difficult to locate. This lacuna is due in part to barriers at the time which blocked many people's access to the forms of media that are privileged in the historical record, such as printing. The relative scarcity of material by or about people of color is also a function of what intervening generations of scholars, librarians, and archivists considered to be historically significant and thus judged by them as worthy of continuing preservation in institutions, often for centuries. There are many stops along the path to a rare book library or special collections where an important piece of history may be hidden, obscured, or erased.

Much work remains to be done in filling the holes in research libraries’ collections, but researchers at AAS are fortunate in that centuries of omnivorously collecting items that fell within the Society’s scope generated library collections of great depth, including evidence of the lives of everyday people and people of color. Collectors in previous centuries may not have been able to foresee the value in these items at the time, but they were gathered in the belief that someday someone would need just this book or pamphlet or newspaper. Such sources can often be read against the grain to highlight parts that might not have been central to the original purpose of the producer of the source but now provide essential glimpses into historical experiences that are difficult to access. Certainly the complexities of this type of research can be challenging.

In just one example from the William C. Cook Jacksonian Era Collection, a number of illustrations were added into the extra-illustrated Life of Jackson that depict racial minorities in Jacksonian America. About a half dozen portraits of Native American chiefs are presented in the volume almost as a form of racial uplift: they are by far the most striking illustrations in the entire volume and the only ones in color. The only other non-European Americans depicted in the extra-illustrated volume appear in an obviously racialized caricature of two African Americans.

One might be tempted to say that the extra-illustrated Life of Jackson does not offer a comparable visual depiction of how Jackson and other white elites of the era may have been viewed by Native Americans and African Americans. Yet that conclusion might be wrong. There may be more black lives waiting to be discovered lurking in these pages in far more ambiguous ways. Take the example in the sidebar of one of the portraits of Jackson that was added into the extra-illustrated volume. This one was done by Julius Lion. Lion is known today as a free black man who was an artist, a lithographer, and one of the first daguerreotypists in the United States. However, recent scholarship has called Lion’s racial heritage into question, suggesting he was of German Jewish ancestry. So we are left in the ambiguous position of wondering whether we do or do not actually have an African American’s view of Jackson after all.