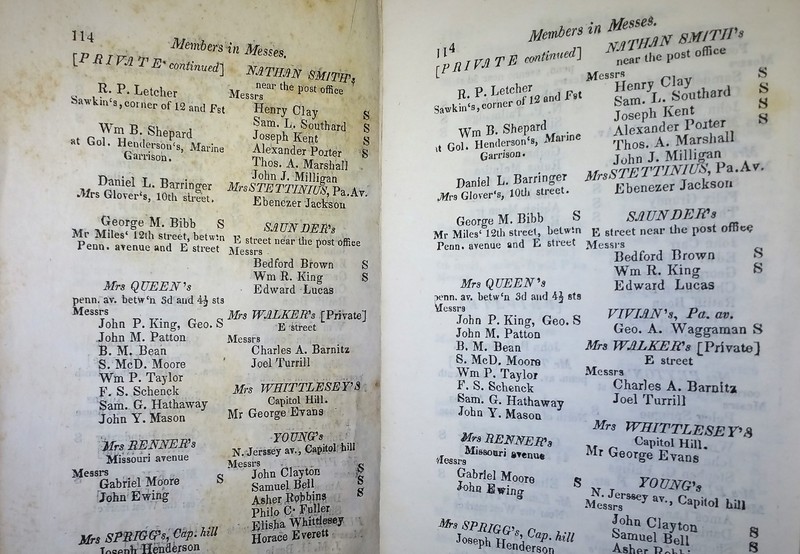 Click here to see if you can spot the differences between these two copies of the Congressional  and State Government Almanac for  1835.

The early decades of the nineteenth century were crucial to the formation of Washington, D.C.’s social and political culture and, by extension, U.S. politics. The U.S. capital had only recently been moved to D.C. in 1801; it was even younger as a capital than the United States was as a nation. After fractious early years of rancorous factionalism, the Federalist Party largely collapsed and in the wake of the War of 1812, D.C. culture was marked by James Monroe’s Era of Good Feelings and the parlor politics described by historian Catherine Allgor. The “good feelings” could not be sustained, though, when Jackson brought a new party to the floor: the Democratic Party, with its populist message and appeal to the masses.

During these critical early years of creating a functional federal government rather than just a loosely bound confederation of states, the transience of D.C. culture made that goal more challenging. People would come into town for government business, staying only part of the year or for only a term or two. Hence the importance of city directories such as the Congressional and State Government Almanac for 1835 from the William C. Cook Jacksonian Era Collection (see sidebar).

Besides an extensive collection of such city directories, the American Antiquarian Society has one of the best collections of the U.S. government’s earliest printed documents, making it an excellent place to study early D.C. political culture—both formal and informal. Just two years after its founding, AAS was made effectively the first depository library in the United States for federal documents, other than the Library of Congress. On December 1, 1814, Congress approved “Resolution 7: For furnishing the American Antiquarian Society with a copy of the journals of Congress; and of the documents published under their order.” This law was passed in part because earlier that year Isaiah Thomas and other AAS members petitioned Congress “to send the laws of the national government to be deposited and preserved in our library.” More information is available on the Government Documents page on the AAS website.