“Jack and the Bean Stalk.” In The Jolly Jump-Up’s Favorite Nursery Stories 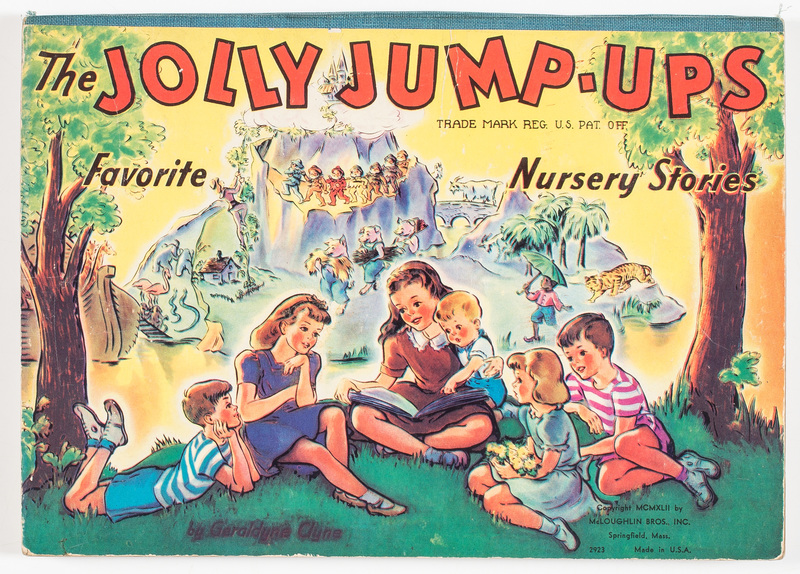 “Jack and the Bean Stalk.” In The Jolly Jump-Up’s Favorite Nursery Stories

The Jolly Jump-Up pop-up books first appeared in 1939 and featured an American family and their adventures (seeing the circus, going on vacation, buying a house). The series also contained titles for younger children, including an ABC book, a counting book, and this title of nursery rhymes. Many were illustrated by artist Goldie Jacobs Klein (fl. 1939–1948) under the pseudonym Geraldyne Clyne. Klein, the wife of Benjamin Klein, who was an artist and teacher at the Cooper Union in New York, held the copyright to a number of the Jolly Jump-Up books, which were one of the few strong-selling products issued under the McLoughlin Brothers name after the transfer to Milton Bradley in 1920.

Clyne, Geraldine, ““Jack and the Bean Stalk.” In The Jolly Jump-Up’s Favorite Nursery Stories,” Radiant With Color, accessed May 26, 2020, https://americanantiquarian.org/radiantwithcolor/items/show/53.