“Sweet William’s Departure” was written by John Gay (1685-1732), the English poet and dramatist who changed music history with his Beggar’s Opera in 1728. The text was set to music around 1720 and exceeded all other sophisticated songs of its era in popularity and longevity (Faber 181-83). The narrative is simple, recounting the moments before sailing when all lovers must say goodbye, a moment welcomed by some and dreaded by others. Set to two different tunes the year it was published, the Richard Leveridge setting has predominated (Schnapper 615-16). The Coverly text lacks verse 3 of the usual song (beginning “So the sweet lark”) but there is no loss of narrative sense.

The lyrics appeared in countless broadside sheets as well as in common songsters and sophisticated song collections. Indeed, it is a rare collection of songs in English to this day that does not contain this song with titles such as “William and Susan,” “All in the Downs,” “Sweet William’s Farewell to Black-Ey’d Susan,” or simply “Black Ey’d Susan” (Roud; Bristol B11194). Interestingly, it is not widespread in oral tradition, although it was sung in America by a folk singer in the nineteenth century as vividly depicted by Uncle Peter’s performance in 1845 (see Sweet William of Plymouth) (M. Green 5:51). The text appeared in seventy-nine songsters between 1760 and 1820 (R. Keller, Early American Songsters; M. Yates; Gardham, EFDSS 13).

“Susan’s Lamentation,” the sequel to “Black Ey’d Susan,” is one among several that take the “William and Susan” story past his sailing. This one does not tell a particularly clear story, a common trait in sequels written to capitalize on the popularity of the original text. The author introduces classical references such as Helen and Paris of Troy and even the old ballad of “Rosamond” (see Fair Rosamond), but these references seem somewhat out of place. There is a dream sequence and an odd ending in which William appears without visible means of transport and the pair are then married. This last verse is taken in toto from a more coherent sequel, “Sweet Susan’s Loyalty,” that details the reunion and recognition of the pair after another lyric relating his return and test of her faithfulness (Madden Collection 3:24 #856). While the author may have planned to have his text sung to the same tune as “Black Ey’d Susan,” it is an uncomfortable fit. The text appeared in eight American songsters between 1795 and 1815 (R. Keller).

All in the downs the fleet was moor'd.
Where is sweet William, where is my dear. 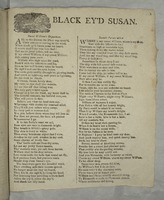 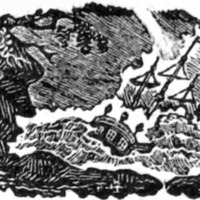