To the teachers of Toryism, together with Priestcraft exposed In imitation of Watt's Indian philosopher

Federalist Massachusetts governor Caleb Strong’s favorable remarks about Great Britain made only a few days after the War of 1812 was declared comes in for fierce criticism in the two Democratic-Republican and anticlerical texts on this broadside. Strong himself was accused of being a Tory, as this first poem suggests.

The second anticlerical text on this broadside is modeled word for word on “The Indian Philosopher,” a semireligious love song set on the Ganges River. It is here credited to Isaac Watts, which is unlikely. This text is a vitriolic criticism of the clergy of New England who can “sing and dance” and after graduation from Harvard, “some turn’d lawyers, some prov’d apes.” As “The American Philosopher,” it was sent by a customer from Brandon, Vermont, to the Rutland Herald where it appeared on February 28, 1810, several weeks after the original text, “Indian Philosopher” had been printed.

“The Indian Philosopher” appeared in several hymnbooks in the 1802-20 period and was collected by a number of manuscript compilers between 1800 and 1810 (Temperley #8879a and b; R. Keller, Early American Secular Music and Its European Sources). For this political song, changes were made to some words to adapt them to the purpose of the author, but the basic text is the same. Jeremiah Ingalls used the same tune (“Ganges”) and metaphor but not the same text in his Christian Harmony (1805), for a text beginning “Dress’d uniform Christ’s soldiers are” (see “Spiritual Soldiers’ Uniform”).

All hail ye mad men, who are cloth'd in black.
Why should our preachers shift their dress? 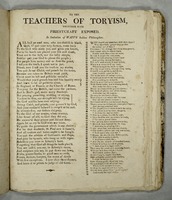 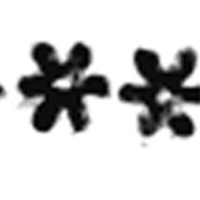 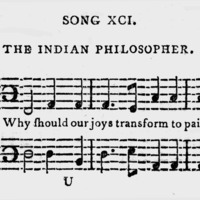 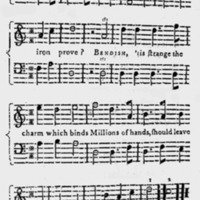 “To the teachers of Toryism, together with Priestcraft exposed In imitation of Watt's Indian philosopher,” Isaiah Thomas Broadside Ballads Project, accessed February 6, 2023, https://americanantiquarian.org/thomasballads/items/show/240.