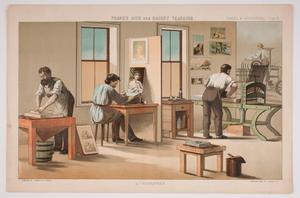 Lithography was first invented in 1796 in Germany, and came to the United States about 1819. Lithographs were created by drawing an image onto a smooth stone, usually limestone, treated with chemicals, and then printed on paper. Color lithography, different than a true chromolithograph, took a lithographic drawing done in black outline, and was filled in with colors produced on different stones. During the Civil War, Louis Prang travelled to Europe to study printing methods overseas to bring back to Boston. He then realized how he could make a lithograph print look like an oil painting, at a much lower cost. Prang detailed this process in a speech to the Pratt Institute in New York just before the release of Oriental Ceramic Art in 1897. He explained:

“Lithography, as we understand it today, is the art of printing from a perfectly flat stone, on which the pattern is neither raised in relief nor cut in intaglio. The lithographic stone, which is an amorphous limestone, dense in texture whitout being hard, …[and] has a great affinity for fat. … The drawing on the stone is made with the lithographic crayon, consisting of soap, wax and lampblack, … The drawing, when finished, undergoes an operation called technically ‘the preparation.’ It consists in flowing over the face of the stone the gum Arabic solution acidulated with nitric acid. The acid neutralizes the alkali of the soup in the crayon and ink, sets the fat free, and in doing so creates a permanent union of this fat with the stone by forming lime soap, insoluble in water.” (New York Tribune)

Because of the “permanent” impression on the stone, lithography became a popular printing method beginning in the 1820s, surpassing engraving, because many more impressions of an image could be made without damaging the limestone. Engravings made on copper and steel would flatten over time due to the pressure from printing, causing less contrast in later impressions, and limiting how many could be made from each plate. During the same speech, Prang then explained how a chromolithograph was produced to resemble an original painting. He explains:

“To make a close reproduction in print a painting of the object is absolutely required. In copying this [Oriental Ceramic Art] collection we were obliged to make a painting of every object … The process … begins with analyzing its color for a color scale … The next step is to cover the painting with a sheet of perfectly transparent gelatin, upon which the outline of the design, as well as the different colors, is to be drawn … This drawing, transferred to a stone by simple pressure and inked up, gives the keyplate [or outline]. The artist has to draw a separate plate for each color … Impressions have to be taken from that keyplate in common black ink on hard highly calendered paper, dusted over with finely powdered red chalk, which only clings to the ink, and thus they are transferred to as many stones as the particular case requires.” 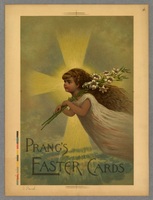 Prang then goes on to clarify in the same article that the outline stone is not used in the final image, the stones are lined up on each sheet of paper, which is marked with small crosses on each side so that it is unlikely to have off-set colors. Highly detailed and colorful works required as many as forty stones. Limestone was quarried from specific sites in Germany, Prang claimed the limestone from Solenhosen, near Munich, was the best for lithography. 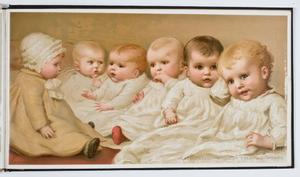 A chromolithograph is made using anywhere from eight to forty stones, one for each color. The chromist, who specialized in breaking down the colors needed to re-create the painting in ink, would document this process in a progressive proof book, so that the image could be recreated easily again if needed. The American Antiquarian Society has seven of Prang’s progressive proof books, including a published version where the process of creating a chromolithograph is explained for the use of salesmen. Seen here, Prang explains the process in creating one of his best-selling prints, Prize babies. 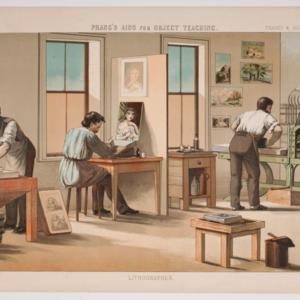 This image is one of twelve published by Prang in 1874 depicting common occupations and trades in "Prang's aids for object teaching." This scene shows… 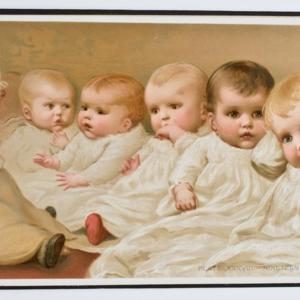 This progressive proof book shows the process in creating an image from nineteen separate color stones. The book was made for salesmen selling the… 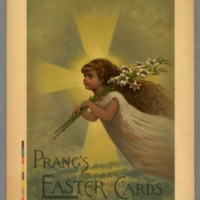 Proofs like this one for an 1886 Easter card advertisement were made for each print. The chromist marked each side with a cross so that the color…