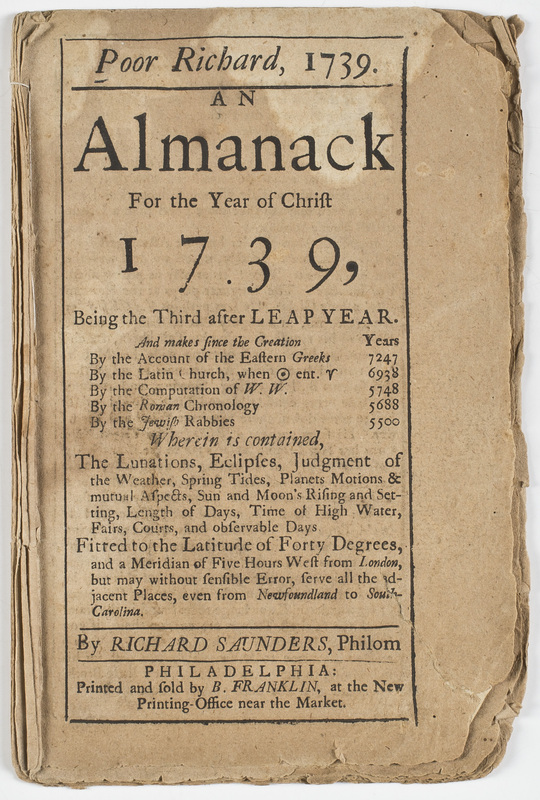 Throughout the colonial period, almanacs were the best-selling product of the American press. The almanac was one of the first imprints of the Cambridge Press—the first press in British North America—in the 1640s; by the 1760s tens of thousands of copies of almanacs were printed every year by a dozen different printers. Boston’s Nathaniel Ames Almanack alone had a circulation of fifty to sixty thousand. American almanacs shared many characteristics with their British counterparts. All featured monthly calendars, with information on tides, sun and moon rises, movements of the planets, and vague weather forecasts. They also typically carried a variety of lists: court meeting dates, information on roads and mileage, and chronologies of public events and “memorable occurrences.” Almanacs helped readers organize the flow of their daily lives, especially since most colonial-era diaries were written into almanacs.

A very popular and highly profitable almanac was Benjamin Franklin’s Poor Richard’s, first printed in 1732. Poor Richard’s is remembered as the depository of Franklin’s famous proverbs and aphorisms. Most of these, however, were copied from other sources; in filling the empty spaces in his almanacs with nuggets of wisdom, Franklin was following the conventions of the genre. But as with all his work of borrowing and editing, Franklin had a knack for rewriting with charm and wit. This 1739 issue has a humorous introduction spoofing the weather forecasts in almanacs and extolling the virtues of mixing serious wisdom with amusing trifles. In a satirical essay at the end on almanacs predicting disease outbreaks, Franklin writes: “THIS Year the Stone-blind shall see but very little; the Deaf shall hear but poorly; and the Dumb shan’t speak very plain.” And tucked into the margins of each month’s calendar page are the famous and not-so-famous aphorisms, including “He that falls in love with himself, will have no Rivals.”